The Starboard GT-R Plus windsurfing foil has the new 95 plus fuselage included in the package. It has the same carbon 800mm front wings and carbon 330mm rear wing as the Starboard GT foils. This new fuselage shifts the front wing forwards and reduces tail wing angle to make it more aligned with the front wing, creating High Efficiency Foil Geometry (NZ Pat. App. No. 751177). With both wings flying through the water at more parallel angles, you release more speed, you get quicker acceleration and more control. The front wing position is further forward so it has more clockwise leverage. The tail wing doesn't need to work as hard so it can be set at a lower angle. When the front wing and tail wing are closely aligned, there is less drag. You fly with more efficiency, more speed and more stability. 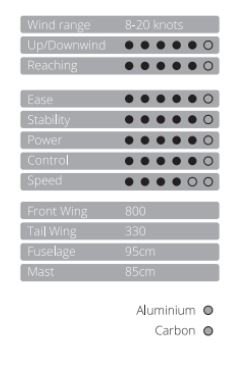