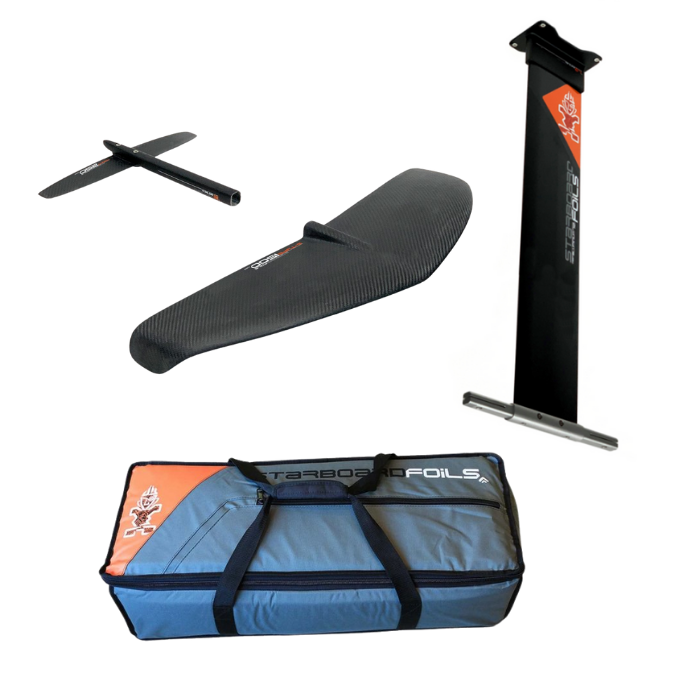 New for 2021, the Starboard Foils S-Type Wing Set is all about speed, smoothness, and stability. This is the perfect wing set that does it all from surf foil, sup foil, wing foiling, windsurf foiling, and an excellent pick for beginners and seasoned foilers alike. These have a forgiving feel that is both predictable and easy to use, yet they still have great responsiveness for carving and pumping. Constructed from a super light carbon layup that will leave you in awe after first picking them up. The wing is a medium-high aspect design that features down-turned wing tips that provide grip and drive through the turns at any speed. This is paired with the new RAZR 250 high-aspect rear wing. The “tip-less” and thin profiles of these new tail wings promotes speed and pumping efficiency, while the slight concave shape helps rail to rail transition. The set is competed with the Carbon Quick-Lock compatible 36cm tail piece to give a total fuselage length of 72cm. This tail and rear wing also utilize the Starboard Foils exclusive "Rocker" style saddle system that allow you to trim the rear wing angle extremely quickly, even while on the water. All Starboard Foils items can be special ordered for factory direct delivery if not in stock. Expect 3-5 weeks for order fulfillment depending on availability. Contact us to place an order.