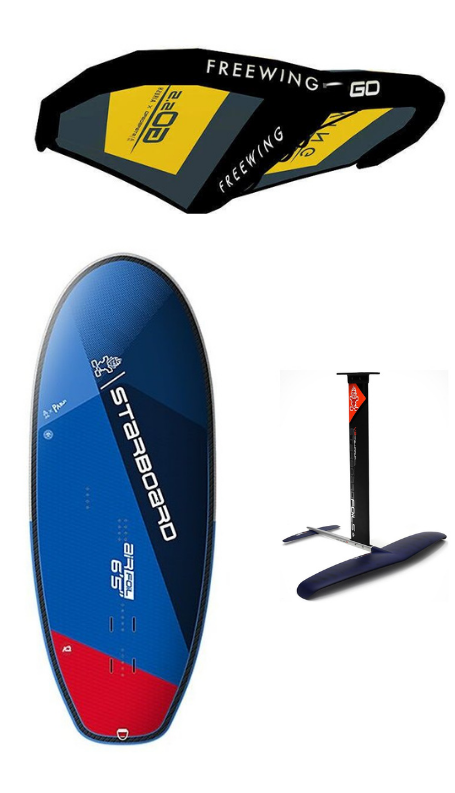 This package includes everything you need to get out and go wing in a super portable package. The starboard airfoil wing board offers best in class inflatable preformance due to the welded rail technology and unique foil top plate design. The foil offers fun carving while maintaining good stability at higher speeds. The wing offers a compact design making learning maneuvers  easier.

The new Air Foil is Starboard’s latest innovative product. This award-winning inflatable wing foil board combines ultimate performance with maximum convenience. The Air Foil wingboard features a new patent-pending top plate technology on the standing area, designed by Starboard: The foil mast is mounted directly to the solid standing area on the deck to offer wing riders direct feedback from the foil and instant response. This all translates into more control and a better flight sensation.

The Starboard Freewing Go is the wing you want for learning to wing (on the water, on snow, or on a skateboard). The FreeWing GO has a pioneering, ultra compact geometry, suitable for any level of rider.The shorter wingtips do not catch when learning, gybing, during advanced water starts or rotations. The short wingtips also enhance the ease of use when not foiling or on snow, ice, with skateboards and land boards. The large diameter middle frame creates instant power and a rigid feel, getting you up and going, despite a relatively lower aspect ratio. The wind range is huge as it’s such an easy wing to control over powered. The handles are easy to grab, while the windows are positioned and optimized for important visibility/ safety.

The Ocean Surf series are for wing foilers who are willing to sacrifice some low-end power and stall-resistance at low speeds for more top-end stability and performance.The Ocean Surf is a low aspect wing that makes it lifty and powerful. The rounded, sweeping leading edge makes it maneuverable and smooth to handle. The monoconcave front view adds extra power by cupping the water as you take off. Once flying at cruising speeds, the monoconcave creates stability.