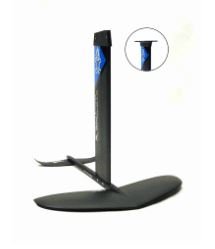 
Maximize your surf foiling experience with this new foil from starboard.  The Wave 1700 was designed with a few things in mind: consistency, stability, and ease of riding.  This foil allows for stable wave riding while also being able to push the limits of performance allowing for very responsive carving on a wave if in the right hands making it a great beginner foil to build confidence that also allows for continuous progression.  The 1700 front wing is designed to get the rider out of the water quickly even if they are in less than stellar conditions and is the perfect size wing for heavier riders.  The Wave 1700 comes with either a base plate or a deep tuttle mounting system so no more need to worry if your board is compatible.