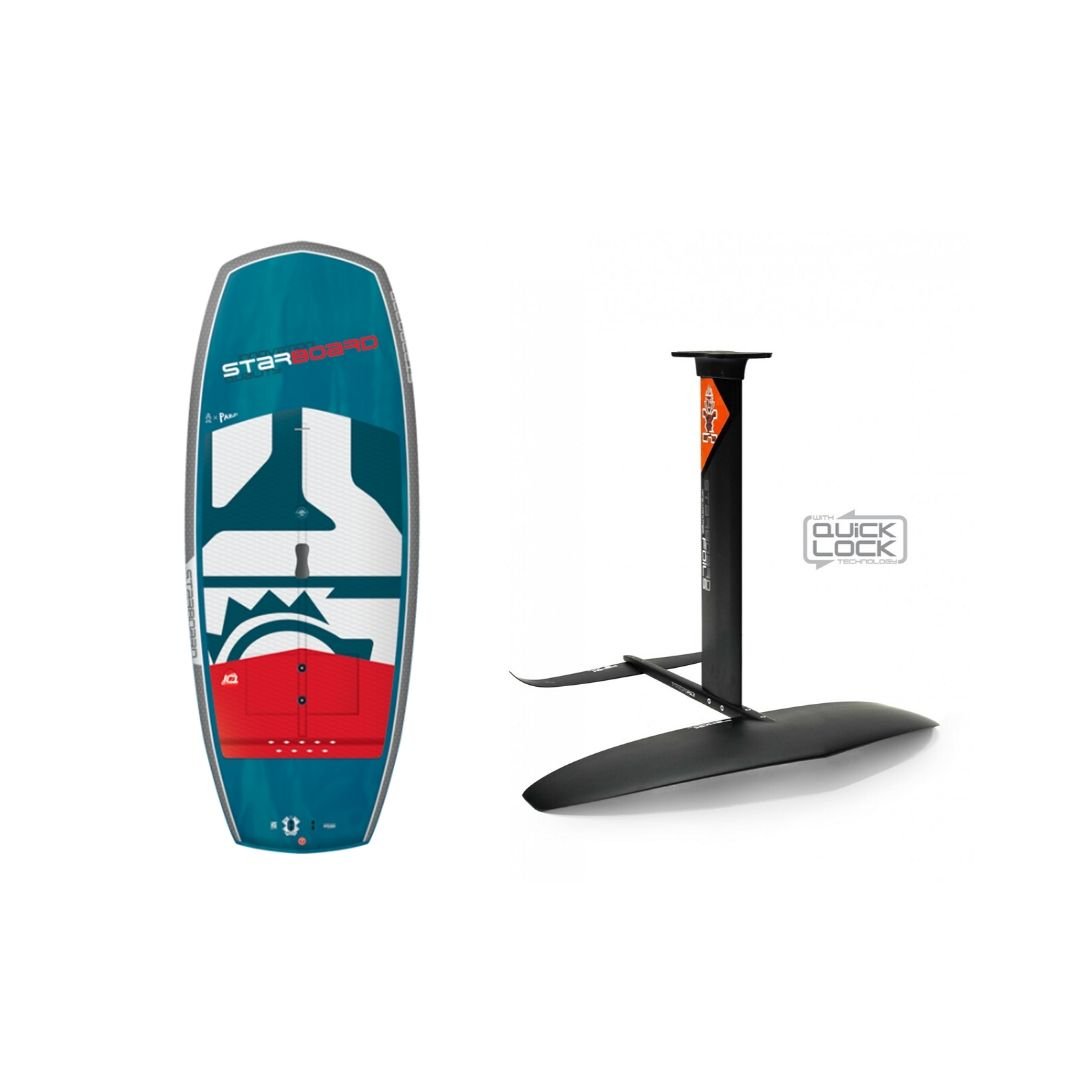 If you are looking at this to get into wing foiling, we also have complete foil wing packages.  Check it out by clicking HERE.

The Starboard Hyper Foil board is a great entry level foil board that will grow with you.  We love this board and think it pairs best with the Starboard Ocean Surf Foil or the Slingshot Hoverglide FSUP V3.   We chose the board.  You choose the foil.  That's how this package works.

Starboard Hyper Foil 6'6" Starlite
The Hyper Foil from Starboard gives you the combination of a short compact outline, distinct channel bottom and thick profile that makes it the best platform for entry-level SUP foiling all the way up to the world’s most progressive riders. Numerous test trips to Bali, Phuket, and continued testing in Hawaii have formed a range that excels in all types of conditions including flat-water pump foiling, wave riding and downwind racing. The straight outline of the board gives stability to ride a short board that is compact and easy to control when flying. The boxy rails maximize the volume of the outline, so you have essential flotation and stability when paddling a shorter board. Starboard really has thought of every way to maximize the performance of this board. Even going so far as to have a recessed deck pad area that lowers the center of gravity for extra stability and control to slightly wedge your feet against the rails. The Eva deck pad has a raised up rail down the center line so you can easily find the balance point of the board with your feet.

The innovative bottom shape has a channel bottom that provides stability similar to a trimaran. It also increases the tracking and control which is crucial when paddling shorter boards. The channels help reduce the wetted surface area to maintain speed on touch downs and releases earlier when getting up. The sharp edge of the channel gives a clean release for less drag through the water. Use this SUP foil board with just a paddle in the waves, or with a hand held wing for a foray into wind foiling!

With the ability to use either a tuttle head foil mount or a plate style mount, you have a lot of versatility when choosing a foil to go with this board.  *BOARD DOES NOT COME WITH FINS*


Starboard Ocean Surf Foil
The innovative new surf foils from Starboard have raised the bar on foil development. The high aspect front wing combined with a large surface area gives you the magic combination of speed AND lift. With this foil you will be able to get going when you are surfing even small waves or just riding ocean swell. Combine it with a foilwing and you will be able to be floating even in light winds. The front wing has moderate concave for more lift and a thin profile for speed and efficiency. Maneuverability when carving is maintained by keeping a moderately curved leading edge on the front wing. Even the mast has been keenly thought out. In the 6th generation of development the extra-hollow aluminum mast is lighter than ever and the triple beam stringer and wide chord makes it the sti?est mast on the market both laterally and torsionally.

One of the most versatile surf foils on the market, you can mount the Ocean Surf foil to your board using the deep tuttle head fitting, or the supplied top plate fitting. Starboard's Quick Lock technology allows you to assemble the foil in less than 10 seconds and with just two screws! No more trying to tetris your assembled foil into your car in order to save time at the beach. If you are using the top plate mounting system you will appreciate the quick lock top plate that eliminates the hassle of trying to line up the screws with the nuts. You will be rigged and on the water in less time than ever!
Whats included:
Front Wing: Ocean Surf 2000 or 2400
Tail Wing: Wave 270
Mast: V6 Aluminum 65cm (+67mm with top plate) for a total length of 67cm/28"
Fuselage: Quick Lock 36 tail piece and Quick Lock 36 front piece
Other: Torx bolt set, torx key, lightweight top plate mounting hardware


Slingshot Hoverglide FSUP V3 Foil:
Perfect to get you up and foiling with a SlingWing, or on your paddle board in small waves or rolling swell! The Slingshot 2020 FSUP package comes with the Infinity 84 wing, which has enough surface area to give you awesome lift, even at low speeds. Also gives you the most bang for your buck when pumping. And the 2020 Slingshot foils come with neoprene wing covers to protect the wings when you are transporting it assembled and a great custom travel case.