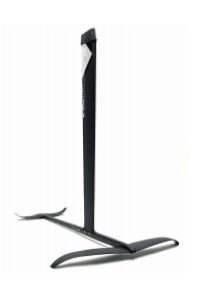 
Take your foil racing to the next level with this new windsurfing race foil from Starboard.  The Race Pro foil is new to 2019 and is ready to set the pace for all of its competitors.  This windsurfing foil was designed for getting out of the water as quickly as possible due to its 1000cm2 carbon front wing.  The front wing gives the rider maximum power for sailing upwind allowing for an early takeoff while also increasing the performance of the foil in those lighter wind days.  The Race Pro also comes installed with a 115cm fuselage which makes the foil very stable letting riders have a much smoother ride which is essential when trying to maintain a lead in a windsurfing race.  This windsurfing foil only comes in a carbon construction, this is due in part to create a lighter foil but also to maximize performance compared to other aluminum foils on the market.